We have all seen the images: ISIS Neanderthals (this is probably a slight on the good name of intelligent and peaceful Neanderthals) smashing up their own heritage and history because they think that the entire universe revolves around a little book, no bigger than the average novel. So where did this barbarity come from? Why have large sections of humanity steered themselves off the tortuous road towards higher civilisation over the many centuries, and into the fetid ditch of depraved ignorance? 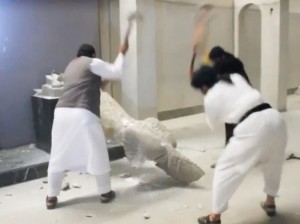 It is true that many religions have harboured a desire to destroy the symbolism of their enemies, but none more so than Abraham, who enshrined iconoclasm into a central component of his new creed.

Pharaoh Akhenaton followed this pioneering move by erasing all the god-images from Egypt. But the ultimately victorious Theban Egyptians extended this strategy by not only erasing the image of Akhenaton’s god, but erasing the entire history of this royal family, too. The stakes in this destructive game were being raised.

But it took Christianity to turn religious iconoclasm into a pogrom against knowledge and civilisation itself. Christianity was founded upon the commandment, ‘Thou shalt not make any graven image’, but the fundamentalists supplemented this command by burning the great Library of Alexandria (see the film Agora for a good overview). At one stroke, simple iconoclasm has morphed into the depraved ideology of ‘sophiclasm’, the destruction of knowledge. That single act probably put the progress of science and technology back by a thousand years. Had it not been for this hatred of Gnosticism – the pursuit of knowledge – we might have seen the first Moon landing in AD 600 and been on our way to the stars.

And if all of this was not bad enough, civilisation then had Islam unleashed upon it, which was described by Winston Churchill as being the ‘strongest retrograde force in the world’ (The River War, Winston Churchill, Vol II p.248). Islam not only regarded women as chattels, it failed to acknowledge anything that preceded its inception. So the destruction we see in the name of Islam is not merely iconoclasm, as the modern media likes to portray it, it is a complete denial of history, science and technology prior to the seventh century. When the Kabul Museum was ransacked in 2001 it was not just idols and images that were targeted, but anything and everything that predated Islam. And, even more distressing, was the fact that this mindless destruction was not perpetrated by ignorant thugs from the backstreets of Kabul, but by the Afghan Minister for Culture. Yes, the very person who had been tasked with preserving Afghan history had been waiting all this time for an opportunity to destroy it all.

Carrying hammers and axes, the Minister of Finance, the Minister of Culture with his adjunct, and the notorious Mollah Khari Faiz ur-Rahamn, ordered that the storerooms be opened. According to a staff member who witnessed the scene: ‘As they entered the storeroom, they snarled in excitement and started to smash everything while chanting “Allahu Akbar” (5th World Archaeological Congress, 22-26 June 2003, Getty Conservation Institute p.266).

And yet where is the world outcry? Where is the Islamic outcry? Yes, we have seen the images and witnessed the hand-wringing, but where is the honest analysis? What motivates this mindless destruction? The UK’s Grauniad newspaper attempted a reasonable analysis, but managed not to mention Islam once, despite the fact that the vandals in the Mosul museum cited appropriate verses from the Koran (21:57-58) before carrying out their destruction (theguardian.com). So the Grauniad’s excuse of an analysis cleverly consigns these destructive urges to the ancient past, without ever pointing any judgmental fingers towards the present.

When some Orthodox Jews tried to destroy the ancient Jewish zodiac at Hamat, on the Sea of Galilee, in May 2012, there was a national outcry at such a moronic act, and a large investigation was launched to catch the knuckle-dragging cretins (timesofisrael.com). But when ISIS destroyed the ancient site at Nineveh, the Turkish Haaretz newspaper penned a novel excuse: the Assyrians had destroyed the region when they invaded the region some 2,700 years ago, and so the actions of ISIS were more like retribution than vandalism (haaretz.com). Such a deceptive mindset is unbelievable, but so typical of excuse-laden Turkey. And yet these inexcusable deflective excuses are not restricted to the Islamic world, for the UK’s Grauniad concluded at the end of one of its analyses that:

The disproportionate attention these ancient ruins have received, compared with human tragedies, has disturbed many. If Isis blows up the site [at Palmyra], it would be largely because of this deemed hypocrisy [by the West)].

Yes, according to the Grauniad, ISIS’s destruction of Palmyra has nothing to do with ISIS or Islam; it is all our fault in the West. Each sledge-hammer-wielding ISIS Neanderthal is not carrying out the demands of the Koran and Hadith in the name of Islam; they are doing it to spite the West for not doing more to stop the slaughter that is being perpetrated and funded by Muslims. So, the continuation of this Middle Eastern conflict between Middle Eastern Muslims is supposedly all the fault of the West; and this despite Saudi Arabia having the largest army and air force in the entire Middle East, and therefore, possessing the power to end this conflict within a couple of weeks. It is an interesting proposal, but one that demands a PhD in conspiracy theory and a container ship of taqiyya.

But, as has already been mentioned, excuses, appeasement and blame-deflection are not the way to curb the destructive urges of fundamentalist Neanderthals. The only way to achieve this is through judgmental analysis, rational justice, and social comedy and ridicule. Especially the social comedy and ridicule. But then another Western cartoonist or film-maker is murdered, and so our Western media and politicians bow their heads in supplication before the flag of fundamentalist Islam. I think we can all see that this is not going to end well.

The last time civilisation bowed before the barbarity of religious fundamentalists, in fourth-century Alexandria, the progress of science, technology and civilisation were set back by more than a thousand years. And there is no reason to think that the modern era will be any different. We might think that our higher education, superior technology and refined civilisation are so securely embedded within Western culture that we could never regress. But there were many Romans who thought likewise in AD 460, when the Western Roman Empire had less than a generation still to run before its utter destruction.

Ralph Ellis is an innovative and tireless researcher who has written several books, including: Mary Magdalene, Princess of Provence and the House of Orange; King Jesus, from Kam (Egypt) to Camelot; Cleopatra to Christ; Scota, Egyptian Queen of the Scots; Eden in Egypt; Jesus, Last of the Pharaohs; Tempest & Exodus; Solomon, Falcon of Sheba; Thoth, Architect of the Universe; and K2, Quest of the Gods. It is no wonder that Ellis’s prolific catalogue of work has kept him at the centre of the history, mystery and esoteric genre for over 15 years. His website is: http://www.edfu-books.com/