WHO WERE THE NEPHILIM?

Who were the Nephilim? The word nephilim appears twice in the Old Testament of the Bible. They are first mentioned in Chapter 6 of the Book of Genesis and then again in Numbers 13:33. But their brief mention in the Bible has led to an ongoing debate as to who or what the Nephilim were. Much of this debate stems from the passage in the Bible that states:

When people began to multiply on the face of the ground, and daughters were born to them, the sons of God saw that they were fair; and they took wives for themselves of all that they chose.

The Nephilim were on the Earth in those days – and also afterward – when the sons of God went in to the daughters of men, who bore children to them. These were the heroes that were of old, warriors of renown.  (Genesis 6:1-4). 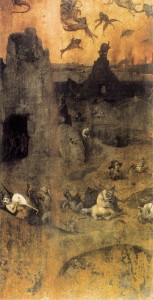 The Fall of the Rebel Angels by Hieronymus Bosch is based on Genesis 6:1-4

The traditional definition of nephilim is giant.  Some dictionaries describe the Nephilim as being giants who also possess super-human strength. The Greek Septuagint, an ancient translation of the Hebrew Bible, refers to them as gigantes, which actually means ‘Earth-born’, a concept we will be coming back to as we continue. It is believed that the word nephilim comes from the root word naphal, which means to fall. In biblical circles this definition has quickly placed the Nephilim into the role of the children of the fallen angels. The word naphal, however, is never directly associated with the concept of fallen angels. Its meaning in context is more closely associated with the idea of lying prostrate or of prostrating oneself. There are also ties in this word to the concept of failure, falling short or being cast down.

Over the years a mythos has developed around the concept of the Nephilim. It alleges that these giants were the offspring of the ‘Sons of God’ and the ‘Daughters of Men’. Are the Nephilim the children of the untoward relationship?

The connection between the biblical text and this claim, although commonly pointed to as the basis of this belief, is unfounded. The document in which we find statements that support this claim actually comes from the apocryphal Book of Jubilees:

And it came to pass, when the children of men began to multiply on the face of the earth and daughters were born unto them, that the angels of God saw them on a certain year of this jubilee, that they were beautiful to look upon; and they took themselves wives of all whom they chose, and they bore unto them sons and they were giants.  (The Book of Jubilees, Chapter V:1)

Is the claim that the Nephilim were the offspring of the sons of God and the daughters of men supported by sources outside the Judaeo-Christian tradition? In other words, does mythology worldwide support this belief?

The notion of giants roaming the Earth can be found in cultures around the world. Greek mythology tells us that the Titan, Kronos, castrated his father, Uranus, in order to gain control of the Greek pantheon.  It is from the blood of the castrated Uranus that fell upon the Earth that the giants, the ‘Earth-born’, were created. The Earth-born, when compared to us, were giants. The giants, under the rule of Kronos, lived during the golden age, in a time that was free from sorrow or care and everyone lived happy and joyous lives. 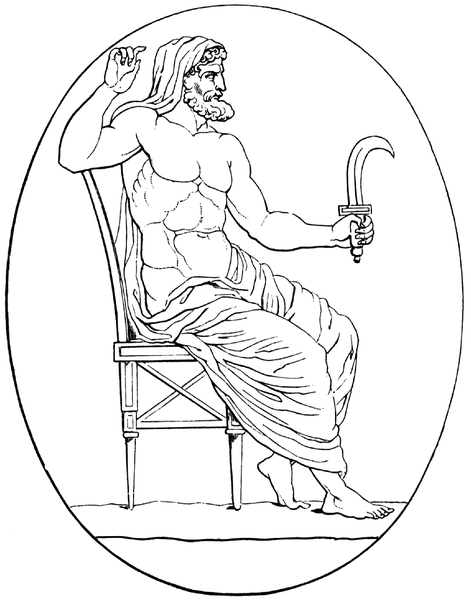 It was only after Kronos’ son, Zeus, fought for control of both the heavens and the Earth that everything changed. Zeus, in his new role (according to Greek myth), put the giants to work. It was just a matter of time before the giants starting ignoring the gods’ mandates. They were no longer prostrating themselves to the will of the gods. Their lack of complete servitude and their failure to comply with the gods’ demands incited the ‘children of god’ into a full-blown rebellion against the heavenly gods. Heavy losses were taken on both sides, but their revolution was finally suppressed by the gods. A truce was declared. As part of their reparations to the giants, it was decided to create a new race to handle the burdens that were cast upon the giants: Man.

Padraic Colum, in his book entitled Orpheus, Myths of the World, relates this tale about the creation of Man. Aztec legend recounts how the Earth-mother, Citlalicue, gave birth to a flint knife. When the knife was flung down onto the Earth it was transformed into sixteen hundred ‘Earth-gods’. (Is there a connection between the flint knife flung down by Citlalicue and the sickle used by Kronos to castrate his father?) These newly-formed Earth-gods lived as men and women and laboured in search of food. After some time the Earth-gods began to think that this work was below their station. They were, after all, the children of the Sky-father and Earth-mother. They asked their mother, Citlalicue, to make a race who would serve them and bear the burdens they faced. With the help of Citlalicue mankind was created.

So, who were the offspring of the sons of God and the daughters of men? The Hebrew Bible refers to them as gibborim. The inferred meaning of this word is men of great stature, heroes, men who are valiant or brave. The Greek Septuagint identifies them as the renominati or men of renown. In Greek mythology the gods have a long history of having relations with humans. The names of some of these ‘demi-gods’, or semi-human individuals, whose names have withstood the test of time include Hercules, Perseus and Achilles. In India they are called Hanuman and Garuda and, in Sumer, Gilgamesh and Adapa.

Interestingly, a parallel myth to this biblical narrative does exist. It comes to us from the pages of the Hindu epic, the Ramayana. This is the epic tale of Rama, the seventh avatar of the supreme god, Vishnu. Rama lived during the Treta Yuga. It was an age where the world was filled with giants. Around the same time as Rama’s birth the supreme god, Vishnu, knowing what was in store for him, requested that all the gods descend to the Earth and mate with the apes and the bears. This request was made in order to, when the time was right, provide Rama with an army he could use to help him conquer Ravana, the giant demon king of Lanka. 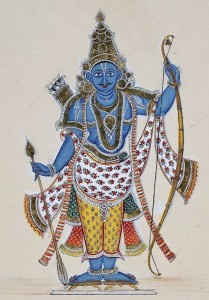 The offspring of these unions obtained an array of impressive skills from their divine parents. The mighty Sugríva was the ruler of the vanara, the ape-men). His father was Surya, their chief solar deity. The demi-god Hanúmán was the son of the wind-god and is described as being able to travel very fast, while Nala was the son of the god of building and construction and is the vanara that helps Rama to build a bridge from mainland India to Lanka.

These thousands did the gods create

In monkey forms that changed at will;

So strong their wish the fiend to kill.

Are the Nephilim the offspring of the sons of God and the daughters of men? No. They were the race of Earth-born giants who lived before the creation of man. They are the group who revolted against the gods in antiquity. They are also the ones responsible for the creation of mankind. Additionally, based upon the references that come to us from the Ramayana it does seem clear that when the gods mated with ‘ape-men’ their offspring were men of renown, heroes or individuals who are valiant or brave.

Dr. Rita Louise, bestselling author and Medical Intuitive, is the host of Just Energy Radio and the founder of the Institute of Applied Energetics. She is the author of the books, Man-Made: The Chronicles of our Extraterrestrial Gods, Avoiding the Cosmic 2X4, Dark Angels: An Insider’s Guide To Ghosts, Spirits & Attached Entities and The Power Within, as well as hundreds of articles that have been published worldwide. She has appeared on radio and television and has spoken at conferences, covering topics such as health and healing, ghosts, intuition, ancient mysteries and the paranormal.  For more information about Dr Rita please visit http://www.soulhealer.com or listen to her live at http://www.justenergyradio.com.